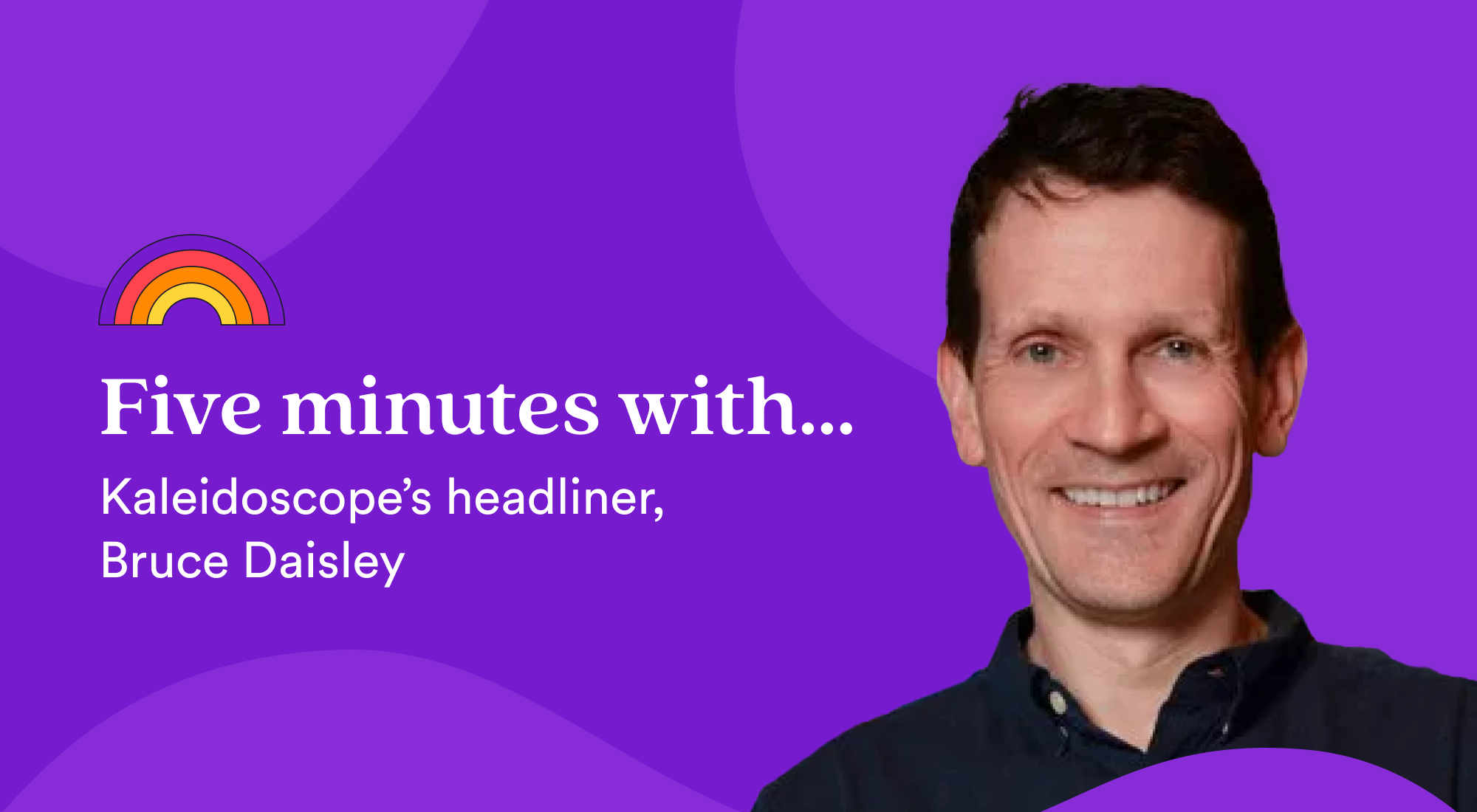 Ahead of Unmind’s in-person event on 4 October, discover what the ex-VP of Twitter – turned podcaster, bestselling author and workplace culture leader – has to say about fortitude, fewer meetings, and the quiet power of crisps (yes, really).

Hey Bruce. You're speaking at Kaleidoscope EMEA (alongside experts from Ocado, Culture Amp, the John Lewis Partnership and more). Why are events like this key to shaping conversations around employee wellbeing?

Well, I think more than anything, we're reminded of the importance of being together in person. It seems to just have a magical effect – even for the introverts amongst us, there seems to be something that's transformational about being around other people.

Also, in service of moving debate on, I think a lot of us, when we're working alone or reflecting on these things alone, we don't get that back and forth of working out what we really think about something, that sometimes an event – and the discussions around an event – can create.

For me, there's no substitute for getting together – ideally in person – to have a discussion on themes that we've probably got an opinion on, but not a fully realised conclusion. It's why it's such a powerful opportunity.

This year, Kaleidoscope’s theme is ‘Shaping tomorrow, together’, and how to support team wellbeing at a time where control, for many, feels out of reach. Have you looked at this in your own work?

It's really interesting, the impact an absence of control has on us. It can be, really simply, the idea that, if we look at our calendar and see back-to-back meetings. Or it can be that we feel that things are happening and we have no personal agency over them.

I witnessed this first-hand – I worked in an environment where we had phenomenal levels of burnout. Burnout is complex, and caused by so many different things. So it almost feels trivial to say that our intervention was, ‘Can we reduce the amount of time that our team spend in meetings?’, but it was transformational.

"Quite often, culture lives at a team level, rather than the company level. So if you're a team leader, can you at least ensure that, irrespective of the decisions made above you, your team feel like they're motivated and enjoying their job?"

I think maybe it's achieved some recognition in how we live our own lives. If we open our diaries and have got back-to-back meetings, and someone sends us an email saying, ‘Can you get this done in the next hour?’, we immediately think, ‘Well, how? How? How am I going to get this done?’.

The times we feel most stressed – we try to get somewhere, and we haven't got enough time to do it – it's a lack of control that often puts us in that situation. I think [it’s about] recognising that, and that a simple intervention often has the most impact.

Certainly, in the environment I worked in, reducing the amount of time people spent in meetings had a remarkable impact on people's happiness and motivation.

You touch on your old career there – as an acclaimed tech leader for the likes of Twitter, Google and YouTube. What inspired you to walk away, and instead focus on the culture of work itself?

I was fixated with workplace culture, firstly, from firsthand experience. Working in great teams is always a joyous thing. When you work in a team and are having a laugh every day, there's something energising about it.

Anyway, through doing and focusing on that, I had a lot of people come up to me saying, ‘This is the situation in my work’. It struck me as complex, but really intriguing. And so, after a while equivocating about these things, I thought, ‘Oh, maybe I'll try and do this full time’.

That's what I spend my time doing now – working with companies as they try and wrestle with ways to solve their problems. There's often very similar themes to the issues they're having, but I love the diversity it gives me.

Your first book, The Joy of Work, explored what it means to flourish in the modern workplace. Why was this your focus?

First, I think it's really important to emphasise, because to some extent it sounds like a boss's manifesto. You know, like: ‘You should be enjoying your work – read this!’, and it was far from that.

"The more we recognise that resilience is the strength we draw from each other, then enabling your teams to nurture that themselves is a really powerful thing that any organisation can do."

It was like this countercultural thing. Are there any ways for us to enjoy our jobs, despite the boss? Quite often, culture lives at a team level, rather than the company level. So if you're a team leader, can you at least ensure that, irrespective of the decisions made above you, your team feel like they're motivated and enjoying their job? That was my inspiration.

I remember going to one organisation and they said, ‘Our receptionist changed the culture here’. I was like, ‘Ok, tell me more.’ They said, ‘She came in one day and said, “The culture here is terrible. No one talks to each other. There's no connection between people.”

She took it on herself, sent an email around the organisation, saying 'It’s the best time of the week – it’s Crisps Thursday!'. She invited everyone to come and eat crisps, off a row of paper plates, laid out down the middle of the company. Within a few weeks, ‘Crisps Thursday’ was the highlight of everyone’s week.

I loved it. In a countercultural way, it shows that, if you are working in a bad culture, everyone can change things. I was really inspired about how everyone can have a little impact on their environment.

If you're working in a wretched place, you don't necessarily have to wait for the boss to improve things, you can be the agent of that change.

Your new book, Fortitude, looks at the meaning of (and many myths that surround) resilience. What motivated you to explore the topic?

I'm fascinated with resilience, because discussions of it are everywhere. You see it on the morning news – any time that something goes wrong, there's always a demand for people to be resilient. And it's so intriguing how we see these things play out.

Right at the start of the pandemic, I said I was writing a book on resilience, and someone I know – she works in the NHS – said, ‘If you mention resilience around here, people will thump you’.

"I remember going to one organisation and they said, ‘Our receptionist changed the culture here’. She invited everyone to come and eat crisps, off a row of paper plates. Within a few weeks, ‘Crisps Thursday’ was the highlight of everyone’s week."

I became fixated with it, and my overall conclusion is that resilience isn't necessarily something that some of us have got and some of us haven't got. Normally, when you see resilience exhibited, it is the strength that we draw from each other. It's the feeling of connection with each other.

And, actually, as soon as you understand that, you start to recognise that's why the people in Ukraine are so resilient. It’s because they feel like they're united, in doing something together.

For employers who want to foster resilience – in the right way – what would you suggest?

More than anything, resilience comes from the sense that we feel connected to people around us – the groups we feel part of. You see really interesting examples of this when people suffer a bout of depression, or maybe they're recovering from a major operation. The biggest predictor of their wellbeing – in one, three or five years – is how many groups they report feeling part of.

The more we recognise that resilience is the strength we draw from each other, then enabling your teams to nurture that themselves is a really powerful thing that any organisation can do.

Bruce Daisley is speaking at Kaleidoscope EMEA, at Fora Soho on 4 October. This is an in-person event, which means demand is high but space is limited. Save your seat today – register for a ticket. 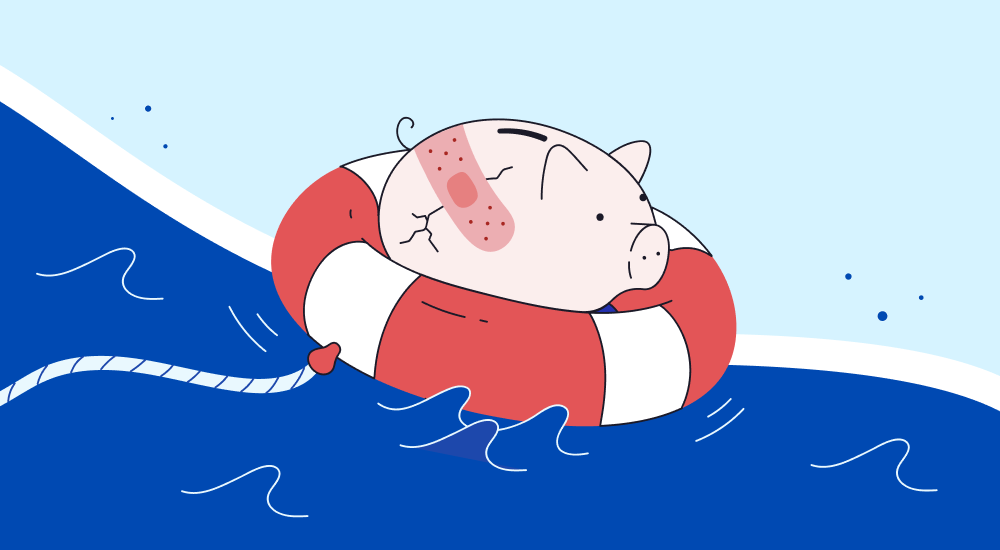